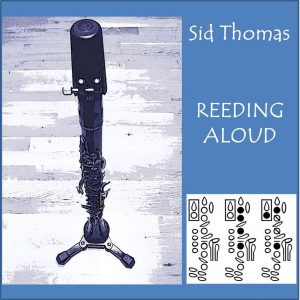 I thought I might explain the how and why of the tracks on the album Reeding Aloud, and others that are likely to be uploaded in the near future. They date from my past, when I had a real, pretty demanding, day job and music was some kind of relief (even therapy on occasions). I would often deal with frustrations, and reset my head, by establishing a groove on the PC and playing over the top (on piano, clarinet or wind synth) until I ran out of energy, ideas or both. I’m not fussy about what I use for percussion tracks. I’ve used sample loops, drum machines, good old Band in a Box, software synths (I like Rebirth), home-made sounds, anything I can get my hands on. I usually set up a chord progression, and initially build a melody by a mixture of improvisation and step-by-step composition. As a result, except for one or two contributions by other musicians, I’m the only organic component on these tracks, but it doesn’t worry me. I’m not trying to pretend these recordings are human-mediated ensemble efforts. They’re largely machine-made, but so what. Even the most analogue, ambient music is enabled by technology. No-one wandered through the primeval forest and stumbled upon a fully-formed Boehm-system clarinet. Music on computers is liberating. You don’t have to coordinate your life with other people, many of whom aren’t interested in you or what you’re trying to achieve. Computers don’t eat, drink, lose parts, want to be paid, or try to steal your girlfriend. Over the years the PC has been a refuge and strength, a very present help in trouble. Vive l’ordinateur!