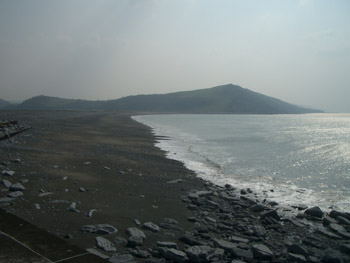 Tanybwlch is a beautiful sweeping storm beach between the distinctive crested profile of Alltwen hill to the south and the confluence of the Rivers Ystwyth and Rheidol to the north.

Although it’s just a few minutes walk from the centre of town (and even closer to where we live), it often feels strangely secluded and pristine, particularly when the weather keeps people away.

Glacially-deposited shingle forms a steep bank between the sea and the lower reach of the Ystwyth.  The river’s original outlet to the sea was about half way along the present beach but this was closed some time in the 18th century (a map of 1809 shows its course to be roughly as it is now) and the river was redirected to join the mouth of the Rheidol at the harbour bar. 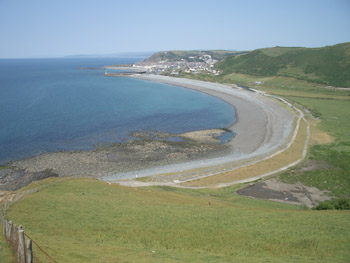 The beach, riverbank and area in between is a nature reserve and despite its popularity with dogwalkers, campers and all-night beach party enthusiasts, it’s home to a number of unusual plants and animals.

Every spring we make a point of looking out for the return of the wheatears, a small community of which spend the summer around Tanybwlch.  Re-acquainting ourselves with these handsome little birds is always a highlight of the early months of the year. Another enjoyable visitor is the whimbrel.  We have seen parties of 25 and more spending a couple of weeks on the beach before continuing their migration. The whimbrels hang around with the resident group of oystercatchers, another favourite species of ours.  We like their unmistakeable peep peep cry, their beady red eyes and that absurd carrot of a beak.

Ringed plovers also frequent the beach, though they seem to travel quite widely and we’ve seen them passing through the harbour and also on Castle rocks.  Very nice little birds indeed.

Clumps of rare creeping blackthorn, said to be 200 years old, can be seen on the shingle bank, and the scrubby undergrowth on the river’s east bank seems to be a haven for songbirds – we’ve heard blackcaps and sedge, reed and grasshopper warblers, as well as the ubiquitous blackbird, chaffinch, dunnock and wren.

From this riverbank the ground rises steeply to the 120 m hill of Pendinas, which is also part of the Tanybwlch nature reserve. Pendinas is the site of one of the largest prehistoric hill forts in Wales, occupied from 300 to 0 BCE.  The fort comprises an upper area on the highest point of the hill, a slightly lower area to the north and a narrow connection (the isthmus) between the two. Most of what is known about the Pendinas site was uncovered in excavations carried out between 1933 and 1937 under the direction of Daryll Forde and reported in the 1960s by the Royal Commission on the Ancient and Historical Monuments of Wales. 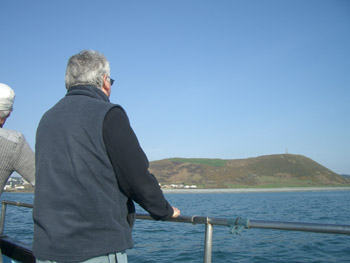 In 1858 an 18m tall stone column on a 1.8m podium was erected on the highest point of the South Fort.  It is known as the Wellington Monument and the original intention was to put a statue of the old boy on top. This never happened, but the monument remains a prominent feature, visible for many kilometres in every direction and is one of the first signs to the returning traveller (by land, sea or even air) that home is near.