The first of The Three Little Pigments is green. This is the story of chlorophyll.

Leaves are the biosphere’s solar panels. If this is so, why are they green and not black? Science is better at answering ‘how’ questions than ‘why’. Here’s a possible explanation for how leaves came to be green. 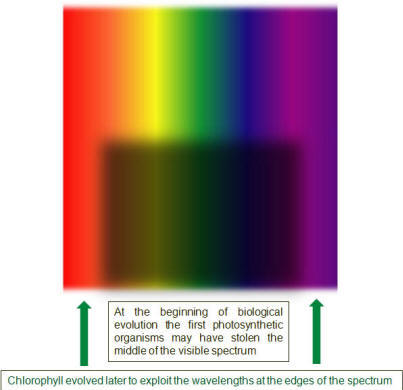 It’s better for a solar panel to be black because it absorbs light more or less equally from the blue to red end of the visible spectrum. Some people think the pigments of the earliest photosynthetic lifeforms absorbed light across most of the middle range of the spectrum. Organisms that take light over these wavelengths would appear to the eye as dark purple in colour – not so far from the solar panel ideal.

Occupation of the central wavebands would create a niche. Organisms with pigments that could use light at the extreme red and blue ends of the spectrum could make a living. Chlorophyll has just such a light absorption profile and appears green to the eye.

For some reason, the green photosynthesisers prevailed during evolution and became the ancestors of all the vegetation that surrounds us today.

Meanwhile the purple types never diversified beyond the single-celled condition and are now confined to extreme marginal habitats such as hot sulphurous springs. It’s very striking the way the absorbance profile of retinal, the pigment of modern purple bacteria, neatly sits in the gap between the red and blue-absorbing peaks of chlorophyll.

Re-creations of the origin of chlorophyll tell us that chlorophyll, and chlorophyll metabolism, have been around from early in evolution, in photosynthetic organisms living in the primeval ocean.

A large proportion of global chlorophyll continues to be found in the oceans.  A rain of chlorophyll has been constantly falling to the ocean bed throughout geological time.  Much of it has been through the guts of animals in the food chain.

Many planktonic animals are transparent and, when they are stuffed with planktonic chlorophylls, they have to adopt special measures to avoid pigment-mediated photodamage.  In some species the wall of the gut is dark-coloured, making it opaque.

Others, such as the brine shrimp Calanus, avoid the light by undertaking a daily vertical migration in the water-column.  If you shine a light on these creatures after they 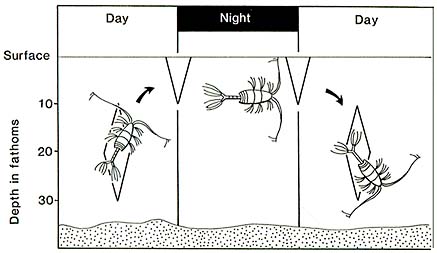 have fed, you can make the unfortunate beasts pop.

The geological ocean chlorophyll rain is thought to be the origin of the distinctive porphyrins found in crude oils and bitumens.  These appear to be chlorophyll derivatives in which the central Mg atom has been replaced by vanadium or nickel during fossilisation.

Breakdown products of ingested chlorophyll in the marine environment may be substrates for the light-emitting enzyme luciferase, responsible for the bioluminescence (phosphorescence) of planktonic and krill species, 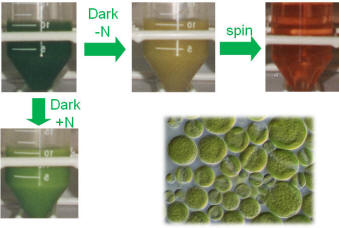 Certain unicellular algae offer a glimpse of the evolutionary origins of colour changes in the foliage of terrestrial plants. When Chlorella protothecoides is starved of nitrogen and put in the dark, it turns yellow – rather like a leaf does when treated the same way. Removing the yellow cells from the medium by centrifugation reveals a red pigment.  The chemical structure of the red product shows it to be derived from chlorophyll. When the pathway of chlorophyll breakdown in leaves was worked out, a red intermediate almost identical to the Chlorella product was found to be a transient intermediate. 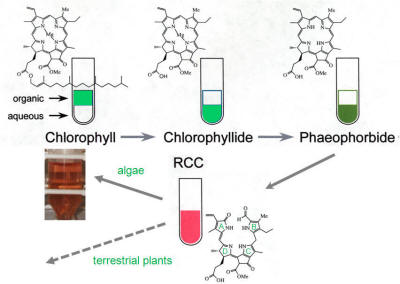 We can show this by knocking out one or other of the enzymes that metabolise RCC and its precursors.  For example the Arabidopsis mutants acd1 and acd2 are deficient in, respectively PaO (the enzyme that makes RCC) and RCC reductase (the enzyme that destroys the 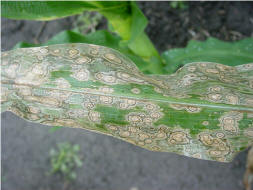 phototoxic red colour of RCC). This picture is of a leaf of the maize lls1 mutant which, like Arabidopsis acd1, lacks PaO, accumulates phototoxic chlorophyll catabolites and develops cell death lesions in the light.

The detoxification pathway in senescing cells typically involves conjugation of the harmful chemical with, for example, a sugar molecule and active transfer across the tonoplast membrane into the vacuole. The vacuole acts as a kind of dustbin, accumulating all manner of terminal metabolites that are discarded when the leaf is shed. By taking a bomb-disposal approach to dealing with chlorophyll during mesophyll senescence, the viability of the cell is protected and nutrient mobilisation proceeds without threat from photodamage.

We may speculate that forging the metabolic link between the RCC-production part of the catabolic pathway found in green algae and the detoxification route leading to sequestration in the vacuole was one of the prerequisites for evolution of multicellular land plants.