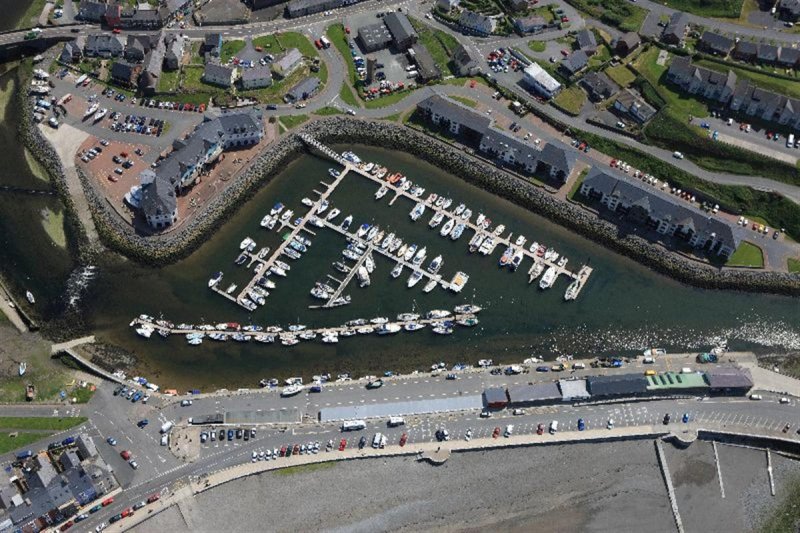 The harbour is literally on our doorstep and provides an ever-changing backdrop to our lives and those of a surprising number of creatures with whom we share this environment.

Before it became an independently-administered port at the end of the 18th century, Aberystwyth Harbour came under the jurisdiction of the harbourmaster at Aberaeron (25 km to the south) and was little more than sheltered moorings where the Rivers Ystwyth and Rheidol entered the sea. 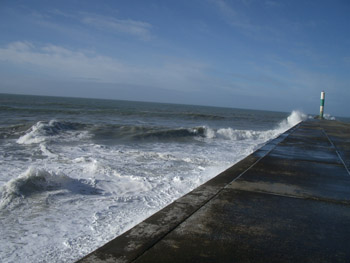 Even so it was the centre of a significant fishing and cargo industry and began major expansion in the early years of the 19th century, becoming Wales’s second busiest port at its height.

A major figure in development of Aberystwyth Harbour was one George Bush (no less), who directed construction in 1836 of the stone pier that marks its southern edge.

The rocks to build the pier were quarried from the foot of Alltwen and transported by a tramway running above Tanybwlch beach.  Odd bits of this construction are still visible.

The harbour then entered a period of expansion and prosperity, adding shipbuilding and transatlantic passenger services.

The opening of the Shrewsbury to Aberystwyth railway line in 1864 marked the start of an extended period of decline for the Harbour, accelerated by severe damage to the stone pier in the storms of 1867.

By the 1970s this area of town was very run down and clearly in need of redevelopment.  The proposal to construct a marina met with a long period of protest and the project did not begin until the mid-90s.

As beneficiaries of the scheme, living where we do, we obviously can’t be truly objective about the rights and wrongs of the Marina development.  But it does seem to have revitalised the whole area, and to judge by the wildlife that literally passes our window every day, it can’t have irreparably damaged the environment.

Considering the marina, and the harbour in general, are such busy places, a surprising number of normally shy creatures come and go. For example we have seen seals, otters and kingfishers literally a few metres from our window.  The harbour has a considerable population of large grey mullet, again easily visible from the window in the summer months, and we also frequently see salmon leaping on their way up the river Rheidol. 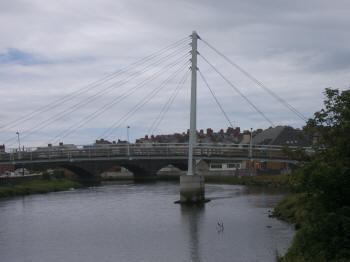 The river enters the harbour from the north after passing under Trefechan bridge.  The original 1800 bridge, designed by John Nash, was washed away in the Great Flood of October 1886.  The present bridge dates from 1888. Further upstream is Pont-yr-Odyn, the Kiln Bridge, opened in 2003.  At low tide a shingle bank beneath the bridge is a favourite meeting and bathing spot for gulls and corvids.  Species using it include herring, black-headed and lesser black-backed gulls, jackdaws and crows.  The occasional oystercatcher, mallard and swan pass by.

Feeding birds on our balcony is rather an antisocial and unhygienic practice, but it does enable us to observe closely the personalities and intelligence of the corvids.  Particularly the jackdaws, birds that have interested us since we read about Konrad Lorenz’s work with this species.

As well as daws, rooks and crows, our balcony has been visited by robins, pied wagtails, blackbirds, sparrows, rock pipits. One-off sightings include a willow warbler and a female black redstart.

Other birds we see round the harbour include dunnocks, wrens, cormorants, shags, gulls, starlings. goldfinches, goosanders, a heron, a muscovy duck, a shoveller and a little grebe. During a severe winter we have seen redwings.