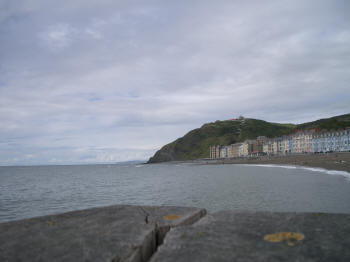 Constitution Hill, sitting at the northern end of the promenade, is a 150 m high lump of crumbling mudstone held together by a thin layer of grass, gorse and guano.

The zigzag paths leading to the top are worth taking for the views when you get there.  Alternatively there’s the 192 m long Electric Cliff Railway, dating from 1896 (originally water-powered but converted to electricity in 1921).

The panorama at the top takes in virtually the entire sweep of Cardigan bay, from the islands off Cardigan and the Preseli Hills of Pembrokeshire to the south right round to the tip of the Lleyn peninsula which points at Ireland which is just over the horizon to the west.

The view can be experienced in a different way inside the Camera Obscura, a 1985 reconstruction of a Victorian amusement, said to be one of the largest of its kind in the world and to look out over a combined land- and sea-scape of more than 2500 km2. 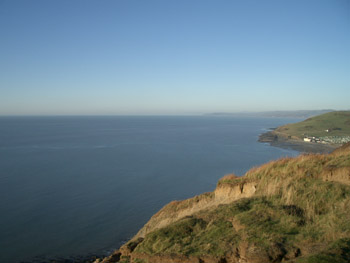 Northward from the Hill runs the cliff path to Clarach and thence to Borth.  The wildlife visible from Constitution Hill and along the path includes seals, greater black-backed gulls, cormorants, oystercatchers, raptors and corvids.  It’s said that leatherback turtles visit to feed on the abundant jellyfish in the Bay, but virtually no-one’s actually seen them.

Beyond Clarach an extraordinary feature is visible as a reef extending several km into the bay from the secluded beach at Wallog – Sarn Gynfelyn.

The scientific explanation for the sarnau, which are found at several points along the Cardigan Bay coast, is that they are long subtidal banks of glacial moraines. 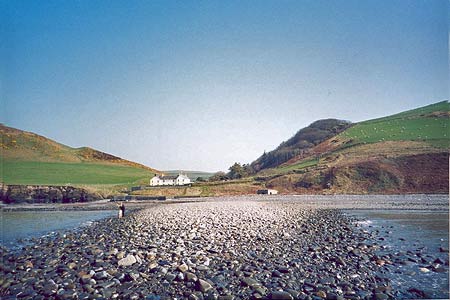 The more romantic version of their story is that they are the remains of causeways leading to Cantre’r Gwaelod, Wales’s version of the myth common to many coastal nations across the world of an ancient drowned civilisation.

Further north are some of the scenic glories of these parts – the estuaries of the Rivers Dyfi and Mawddach.  If these landscapes occurred anywhere else, say a country with an aggressively promoted worldwide brand like Ireland, they’d be marketed without mercy by the tourist people.

Wales has never got the hang of this kind of image-peddling and so generally the country’s extraordinary scenery remains pretty much a secret.  I suppose those of us who live here must want it that way, since it preserves the qualities we like and keeps out the riff-raff.

Within the broad sweep of the Dyfi estuary are several internationally important habitats and a rich diversity of flora and fauna.  Of particular note are the Ynyslas sand dunes, Cors Fochno (Borth Bog), the RSPB reserve at Ynys Hir and the Cors Dyfi Nature Reserve, home of the amazing Dyfi Osprey Project.

The birdlife of the estuary includes large seasonal populations of migrant geese, ducks and swans, an increasing population of little egrets, and rare raptors such as the marsh harrier and osprey.

The Dyfi Estuary is where south Wales ends and north Wales begins, a boundary that is more than merely geographical but also represents a change of culture, economy, geology, history and dialect.

Which adds to the richness of living in this beautiful, elusive little country.