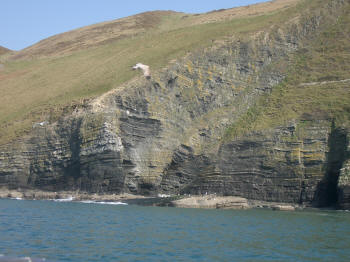 The sloping cliffs to the south of Tanybwlch beach are clearly made of crumbly layers of mudstone, deposited on the bed of shallow seas in the Silurian period (430 million years ago) and known to geologists as Aberystwyth grits.

During orogenic (mountain-building) episodes 395 million years ago, these layers were compressed, raised and folded.  Fossils are poorly represented.

In the glacial period 2 million years ago a variety of much harder igneous rocks were transported to the coast, often from vast distances away – pink and red jasper from North Wales, granites from Scotland and the Lake District, agates, quartz and amethyst from far afield and even flint from North of Ireland.

In places on the coast of Cardigan Bay, the sea seems to have retreated some way from the base of the cliff line, leaving low-lying land that has been farmed and built on (for example, between Llanrhystud and Aberaeron).

Some 80 km north of Aberystwyth is Harlech Castle, built between 1283 and 1290.  Antique (but in all likelihood romantically exaggerated) pictures show it occupying a crag immediately above the waves but now it is separated from the sea by several km of sand dunes.

Elsewhere, including the area around Aberystwyth Castle, the sea appears to have encroached further in historically recent times. For example the remnants of St Mary’s Chapel, which was washed away in 1650, can still be seen on Castle rocks.

Around the harbour in Aberystwyth archaeologists have found evidence of hunter-gatherer communities living in woodland areas dating from up to 9000 BC, a time when the sea seems to have been many km out.  At Ynyslas, a few km north, low tides regularly expose a petrified forest on the beach.

So the indications are (at least to our non-geologist eyes) that the coast has tipped and buckled, while sea level has gone up and down quite a bit in the comparatively recent past.  This is reflected in the local legend of the ancient drowned kingdom of Cantre’r Gwaelod beneath the waves of the Bay.

The stretch of cliffs from Penderi Nature Reserve and Monk’s Cave to Alltwen is generally separated from the sea by a rocky zone which gets covered by the high tide.  There is a small colony of seals towards the southern end, most easily seen by boat.

The land on the clifftop is largely sheep pasture with some unimproved scrub.  This is where we find one of our favourite birds, the chough. Love them or hate them, it can’t be denied that the corvids as a family are resourceful and admirable animals.  Crows, rooks and (increasingly) magpies are highly visible and have adapted to coexistence with humans despite a history of persecution.

But the chough keeps itself to itself, is a specialist of more or less remote, roughish pasture and is altogether a delightful creature.  In appearance, behaviour, intelligence and sound it is a pleasure to experience and we count it as one of our favourite birds. We have also made the acquaintance of its continental cousin with the yellow extremities, the Alpine chough, on our frequent visits to Switzerland.  We have been greatly entertained by the organised way in which these intelligent birds work together to perpetrate outrageous distraction thefts of food from humans at the outdoor restaurant on Mount Pilatus. Here’s a short clip of Helen meeting the Jungfraujoch choughs.

Another favourite corvid found on the cliffs to the south is the raven.  A particular pleasure is to hear its extraordinary deep and sonorous call as it flies over. Other enjoyable birds of this habitat are the fulmar (nesting on the more inaccessible cliffs to the south) and our common but nevertheless spectacular raptors, the red kite and the buzzard.