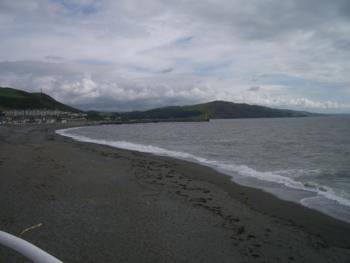 South Beach extends from the harbour mouth to Castle Point.  This is where we get regular sightings of the Cardigan Bay dolphins.

The dolphins roam throughout the Bay but are seen most often further south.  Of course everyone regards the dolphin as some kind of spiritually elevated, even saintly, animal, but they have a dark side.

There is evidence that the decline in the local population of porpoises is linked to attacks by dolphins.  You don’t get to be top predator in your foodchain without being a ruthless and efficient killer.

Dolphins may have smiley faces and an engaging attitude to humans, but we’re not so sure that a mackerel feels too well-disposed towards them.

Off Castle Point is Cormorant Rock which gets its name from the fascinating bird that likes to congregate there.  It’s visible from our window and, through the binoculars, we’ve seen up to thirty cormorants and shags gathered to digest their catches and dry off their feathers. 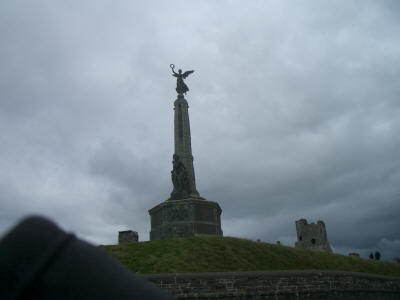 The Castle dates from 1277 and is one of the ruins that Cromwell knocked about a bit (in 1649).  The War Memorial, designed by Italian sculptor Mario Rutelli and built 1921-23, is a striking construction in the Castle grounds featuring the figure of Victory gesturing to the open sea.  Her dramatic unclad embonpoint has given “promise of pneumatic bliss” to generations of the town’s adolescents and less worldly-wise undergraduate students.

In 1865 work commenced on a large Hotel alongside Aberystwyth Castle, originally conceived as a way of getting rich from the surge of visitors arriving by the new railway line from Shrewsbury and the Midlands. 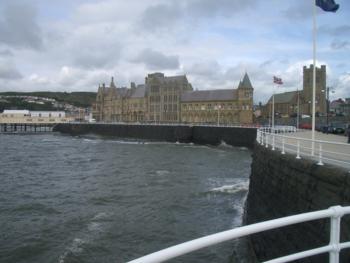 The venture was cursed from the start and eventually the unfinished building was purchased (for £10000) by the Welsh National University Committee.  In 1872, to great rejoicing within the town and the principality, it was opened as a University (the first in Wales) with 26 students.  “Old College” is a striking neo-Gothic pile that is now looking for a new role since the University has largely relocated to campuses elsewhere.

College Rocks stretch from Castle Point to the Pier.  Amongst the notable birds that frequent this habitat are the strangely named purple sandpipers – strange because there isn’t a hint of purple anywhere in their plumage.

Spotting the purple sandpiper is a mid-winter game.  They are easy to overlook, not just because of their sombre camouflage but also because they don’t seem to do very much except sit around all fluffed up and look sleepy.

By contrast a much busier bird often accompanies them – the turnstone.  They live up to their name, turning stones and darting about in pursuit of tasty titbits.  Strangely for a wader, the turnstone seems to dislike getting its feet wet and dances away from incoming waves as if its life depended on it.

This is consistent with stories of turnstones hitching rides on ferries to avoid the possibility of wet feet.  The turnstone is very catholic in its food preferences.  There are even reports of it cheerfully munching on human cadavers washed up on the beach.

Other birds of this area are oystercatcher, ringed plover, the usual gulls and corvids and, most spectacular of all, starlings.

Poor storm-lashed and truncated Aberystwyth Pier (the earliest record of a pier in the same location dates from 1801) is the winter roosting place for tens of thousands of starlings which perform extraordinary displays of synchronised aerobatics each evening prior to roosting.

Why do they do it?  Perhaps it’s an adaptation to the presence of predators (the occasional raptor has been seen in the area), or some kind of social bonding ritual.  One curious feature is that, with the exception of the noise made by their wings, the birds are completely silent during their display, in contrast to the merry squawking, fizzing and chattering they indulge in when perching or feeding.