As the world struggles to wean itself off fossil sources, it turns to biology for its energy.

The original bioenergy source was humanity itself: from the individuals and small communities who invented agriculture to the slave cultures that built pyramids.

Then there were 30-manpower oxen and horses, and civilizations powered by deforestation – and even now hands, wood, livestock, and dung meet the energy needs of much of humanity.

One of these is the solar photon, a constant flux of which falls, gratis, from the sky onto every inch of sovereign territory.

Something like 70% of the non-urban surface of the UK is, in the broad sense, grassland.

What could we do to exploit the photons captured by this gigantic solar panel, given that the grassland environment is largely remote and rugged and it’s too impractical and energy-demanding to send agricultural vehicles up there to harvest the biomass and bring it back?

What we need is a solar-powered self-driven all-terrain machine; and if it’s also a sort of factory-ship, processing biomass as it goes, so much the better.

Of course, such a machine already exists – it’s called a sheep.

Throughout history, the sheep has been so effective that it almost completely replaces forest (and, even in the case of the Highland Clearances, people) as the means of securing the national upland photon resource.

Ruminants like sheep and cattle really are remarkable and fascinating machines, able to turn inexpensive, renewable, dispersed biomass into high-value, high-density products; but of course, there’s a price to pay.

It’s not the poor animal’s fault, but milk, meat, and wool aren’t the only products of its wonderful fodder-processing powers: it also returns some of what it takes into the atmosphere, soil, and water in less welcome forms.

Not only can these emissions be bad for the environment, but they also represent material that could have been captured in food and fibre.

In this sense, the ruminant, though the faithful and uncomplaining servant of mankind from prehistory to the present day, is rather inefficient and can be difficult to manage in a sustainable way.

If we look at the nitrogen balance of a grazing dairy cow, for example, we find that as much as 80% of what goes in at the front end comes out of the back and only about 20% is recovered in milk; why is this?

For the answer, we need to travel to the mysterious world of the rumen.

The rumen is a large fermenter containing a complicated mix of microbes that turn forage into the raw materials for the animal’s growth and milk production. 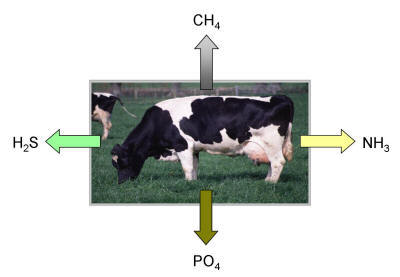 As in any ecosystem (and that’s one way to think of the rumen), energy supply is a priority for the organisms that have to live, compete and reproduce there, and the best energy source for rumen microbes is soluble sugar in the feed.

The largest potential source of energy in forage, however, is the sugar bound up in plant cell walls, but this isn’t soluble and not very accessible.

The trouble is that forage protein is a more available energy source than cell wall sugar.

Protein breaks down into amino acids, which ideally should be absorbed by the animal and built up into its own meat or milk proteins.

But if energy is in short supply in the rumen, the microbes will cheerfully use amino acids to bridge the energy gap, stripping amino nitrogen from the fermentable carbon skeletons and excreting it in the form of urea, with unwelcome environmental and economic consequences.

Research to address this problem is directed toward reducing the breakdown of protein to amino acids in the rumen, and increasing the availability of sugars so that the microbes aren’t so tempted to go for proteins as an energy source.

And then there’s the associated question of emission of the potent greenhouse gas methane by ruminants – one that also has rumen microbiologists and animal nutritionists searching for urgent answers.