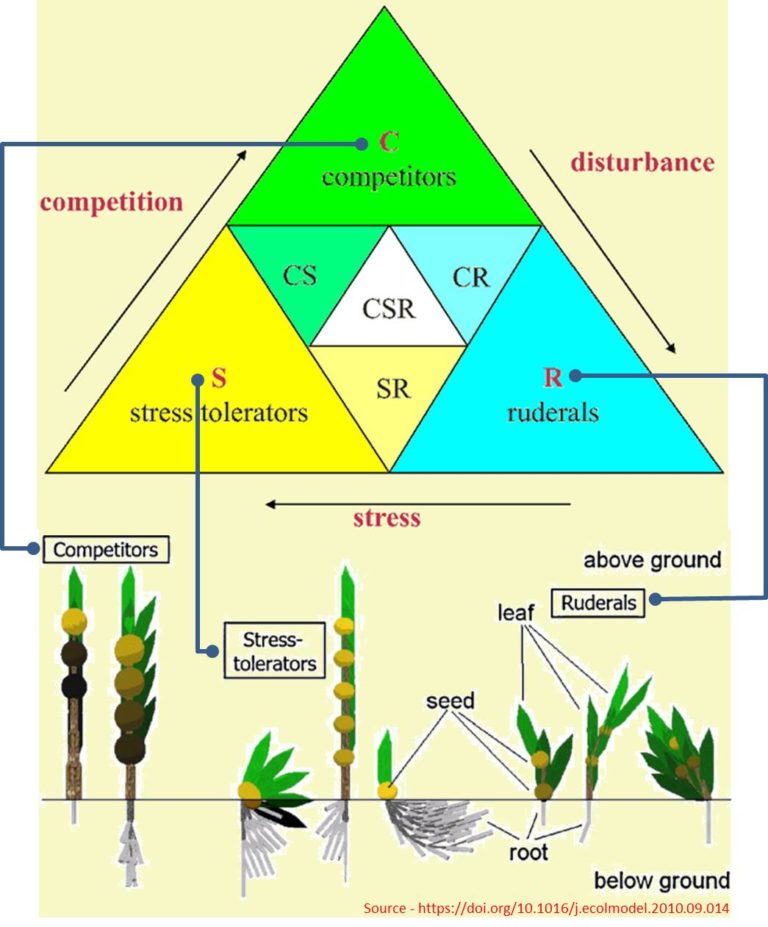 Everyone wants agriculture to be sustainable, but there’s not much agreement about the best way to achieve this. At one extreme there’s the view that intensification and technology are the answer, making cultivated land maximally productive, thereby relieving pressure on natural ecosystems. Alternatively, there’s the aggressively anti-technological green activist approach, going beyond even quite rigorously applied organic principles. Somewhere between the two ends of this spectrum of attitudes comes agroecology, which considers agriculture to provide not only food, feed, fuel, and fiber but also a wide range of ecosystem services. It’s the job of ecologists to understand ecosystems. I’m not an ecologist, but I’ve seen them in action, and here are my impressions.

When faced with something big and complex like an ecosystem, the scientific instinct is to simplify, categorize and generalize, thereby imposing some kind of analyzable order on (in the mathematical sense) chaos. Many ecologists like to do this by thinking in terms of strategies. Roles and behavior within ecosystems are grouped into a few types, and species are classified according to which strategy best describes their characteristics. In this way, the ecologist can analyze how a community or a habitat is built, what makes it tick, how it will respond to environmental challenges, and (if that’s what we want) how to manage it.

There are many schemes for categorizing ecological strategies. The most widely-used take two or three components that describe function and place species along the gradients between functional extremes. For example, Philip Grime proposed the C-S-R model, which classifies tendencies into Competitor, Stress-tolerator, or Ruderal categories. I’m looking at this as an outsider and, if I understand it aright, the term ‘strategy’ that is widely used in this kind of ecological analysis has a specialized meaning. At least I hope so because otherwise, the dread specter of teleology looms.

The etymology of strategy can be traced back to military planning and generalship and its conventional meaning strongly implies intention, planning, and artifice. It’s difficult to imagine a scheming plant. I suppose what the vegetation strategy people have in mind is the evolution of combinations of traits that natural selection has arrived at based on particular classes of environmental challenges. If I’m right, this is a more passive and stoic relationship between categories of plants and the characteristics of their habitats than the active nature of strategy implies.

Another approach to sorting vegetation into classes is simply to count. The champion of plant demography (counting births, deaths, immigration, emigration) was John Harper, who initiated this field of study with an influential paper in 1967 titled ‘A Darwinian approach to plant ecology and expanded the arguments into the classic textbook Population Biology of Plants (1977). Perhaps it’s a comment on my sheltered laboratory-based research upbringing but I find the clean-cut quantitative nature of the demography approach somehow more intellectually coherent than the fuzzier and more subjective ideas of the functional strategy school.

Just as ecologists use different classification systems, it’s amusing to classify ecologists – an exercise in defining an Ecology of Ecologist, so to speak. Perhaps the most fundamental tribal divide concerns the attitude to the experimental intervention. When I hear a proposition about how some aspect of biology works, whether it’s a detail of biochemistry or a complex evolving landscape, my instinct as a lab scientist is to put it to the test by changing the system and recording whether the consequence conforms to expectation. In my experience, however, there is a tribe of ecologists that practices the doctrine of look but don’t touch. As they see it, the job of the ecologist is to observe and record but not to intervene. The understandable desire to minimise human impact on the environment relates to the ideas of the ecosophy movement of the likes of Arne Næss and Félix Guattari. Strangely something of the same attitude seems to have crossed over into the world of academic ecology. One of the few stand-up public shouting-matches of my professional life happened when I disputed with an ecologist colleague who was prepared to do everything a research scientist should do to address his problem of interest except actual design and execute a hypothesis-testing experiment. The belief that you should contemplate nature but not interfere with it seems to me to be an ethical viewpoint, not a scientific one. It reminds me of the Uncertainty Principle of Heisenberg, who taught us that merely to observe is to change. The observer is part of the observed system, whether she likes it or not.

The future of ecology is already here. At the risk of indulging in the modern biomedical sin of genetic imperialism, molecular biology and genomics are offering a different way of reaching into ecosystem complexity and pulling out the essential structures and functions. Traditionally the way to collect plant ecology data was to throw a quadrat and work through the material within its boundary, identifying species and structures. But a geneticist might argue that what is really important is what genomes are present and what genes they are expressing to make sure they survive. The reason we need to name species and record flowers, leaves, and so on is that they are proxies for genomes and transcriptomes (expressed genes). The rate at which molecular biology resources are developing, the arrival of what may be facetiously called the pocket DNA sequencer, the rise of metagenomics, and the application of the tools of Big Data mean that we are able in principle to dispense with proxies and go straight to the real thing. The Ecology of Ecologists (and agroecology) welcomes a new population – the genecologists.